"Everyone was researching lithium-ion batteries. It was such a narrow focus. That wasn't for me. I wanted to do something different," he explains.

So the contrarian-thinking Komaba ultimately struck out in a different direction. While lithium-ion batteries have much to recommend them, they also have a downside: lithium is a limited resource, lithium-ion batteries require costly chemicals such as cobalt and their safety record is not entirely satisfactory to explosion accidents. In particular, the rising demand for lithium-ion batteries due to new applications—such as in tablet computers and electric vehicles (EVs)—has highlighted the scarcity issue. In contrast, sodium is nearly ubiquitous, much less expensive and sodium-ion batteries can conceivably be made using existing battery manufacturing plants.

"You can study battery science anywhere, but Japan has long been at the forefront of battery research. And I don't think there is anywhere else in the world that you can conduct this level of cutting-edge research so close to and working with so many companies that actually bring this technology to market," Komaba says.

Once at TUS, Komaba focused on accomplishing what many said was impossible: creating a sodium-ion battery with high-energy density and a satisfactory cycle life. After much work crafting a workable electrolyte, in 2009, he and his team created the world's first working sodium-ion battery.

His research has ignited a surge in interest in and research on sodium-ion batteries.

"Five years ago, apart from us there were only three or four places doing similar research. Now there are hundreds of researchers all over the world studying sodium-ion batteries," he explains.

Remaining barriers include increasing the storage energy of these batteries and developing better electrode materials, areas that Komaba and a growing group of researchers are actively pursuing.

"In terms of energy capacity and battery performance, right now I would say we are the top in the world, but in recent years competition has been intensifying," Komaba says.

An International and Collaborative Bent

"Walking the streets in France, people would often think that I was Chinese. I always tell my students that they should experience being called an ‘outsider' at least once in life. It broadens your perspective," Komaba says.

Apart from Bordeaux wine, in France, Komaba was drawn to the tendency of researchers to conduct scientific research for the sake of research—to exhaust all possibilities with the aim of deepening understanding—rather than blindly pursue improved performance, which he says is the norm in Japan.

The Latest in a Long History

Japan has been at the cutting-edge of battery invention for more than a century. Komaba is the latest in a long line of TUS pioneers in battery research and development. In fact, TUS graduate and engineer Sakizo Yai invented the dry-cell battery in 1887.

And, like Yai, Komaba's achievements are beginning to receive recognition. In May 2014, he was one of five recipients of California Institute of Technology's inaugural Resonate Award, which recognizes emerging innovators in the field of energy science and sustainability. The award noted Komaba's work "in developing materials for safe, efficient battery storage for electric vehicles and the grid."

It is still early days. Sodium-ion batteries have only been around for a few years. While they will always be heavier than their lithium brethren, Komaba sees potential niche avenues—including zero-emission vehicles and stationary use—where they could prove to be inexpensive, green and sustainable energy solutions.

If all goes well, the name Shinichi Komaba could end up firmly entrenched in the annals of battery history.

After obtaining his Ph.D. from Waseda University, Professor Shinichi Komaba joined Iwate University as a research associate, later working as a post-doctoral research fellow at the CNRS-ICMCB, France. He joined the faculty of Tokyo University of Science in 2005. Professor Komaba has developed electrode, electrolyte, and binder materials for sodium-ion batteries to develop safer lithium-ion battery systems. He received the inaugural Resonate Award in 2014 for his research on energy storage seeking to develop safer and more efficient batteries. 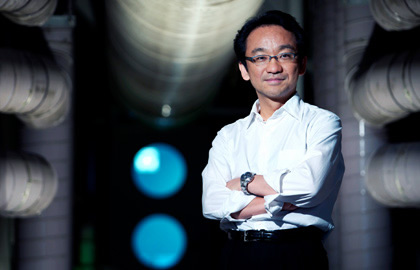