Waste Not,
Want Not

Put simply, Iida and his team are working to create something using essentially hot air. Right now, Iida and his research are at the vanguard of turning waste heat into electricity.

Do No Harm
Overcoming Technological Challenges

It was Iida's commitment to benign solutions that proved both the biggest hurdle to his developing a workable thermoelectric material and also fueled his greatest achievement. This approach and his expertise in materials led him to pursue changing waste heat into electricity using magnesium silicide (Mg2Si). Iida points out that the material has a number of things going for it: it is non-toxic, abundant and comparatively inexpensive—especially relative to the more toxic alternatives. In addition, it is light, which lends itself to automotive applications.

Still, there was a problem.

"Mg2Si had been known for a long time. The reason that it was not used until we developed a way to do it is because the boiling temperature of magnesium is lower than the temperature for synthesizing the crystals, so the magnesium would turn into gas," Iida explains.

Professor Iida, a former Fellowship of the Japan Society for the Promotion of Science and a Visiting research scholar of the Volkswagen Foundation, joined TUS in 1997. Since then, at the Faculty of Industrial Science and Technology has been focussed in the research of Semiconductor Energy Materials and ‘Environmentally Friendly’ Semiconductor Materials. 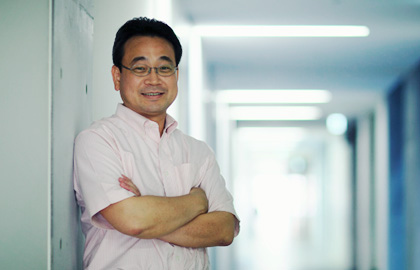