New family on the block: a novel group of glycosidic enzymes -Scientists discover a candidate for a potential new "family" of enzymes that break down carbohydrates-

A group of researchers from Japan has recently discovered a novel enzyme from a soil fungus. Intheir study published in The Journal of Biological Chemistry, they speculate that this enzyme plays important roles in the soil ecosystem, and then describe its structure and action. They also think that once the usefulness of the main product of this enzyme is better understood in the future, this enzyme could also be exploited for industrial purposes. The researchers state, "Our study sheds light on the fact that new enzymes are still being discovered. It possibly lays the foundation for further research to identify new enzymes that yield carbohydrates that were once thought to be extremely difficult to prepare."

Carbohydrates are probably the most versatile organic molecules on the planet, as they play various roles in organisms. Accordingly, the functions and structures of enzymes related to carbohydrate are just as diverse. Glycoside hydrolases (GHs) are enzymes that break "glycosidic bonds" in carbohydrates or sugars. GHs are the largest known group of carbohydrate-related enzymes, and the group keeps expanding. A novel family, GH144, was identified by the same research group in the past from a soil bacterium Chitinophaga pinensis and called CpSGL.

The enzyme endo-β-1,2-glucanase (SGL), a member of the GH family, is involved in the metabolism of β-1,2-glucan, which is a polysaccharide (sugar chain) composed of β-1,2-linked glucose units. β-1,2-glucan serves as an extracellular carbohydrate that plays important roles in the symbiosis or infectivity of some bacteria. However, the role of SGLs in eukaryotic cells and their relationship with bacterial SGLs are not well understood.

This group of Japanese scientists from different universities and a research institute, working on a collaborative project led by Masahiro Nakajima, has discovered a novel SGL enzyme from a soil fungus, Talaromyces funiculosus. The enzyme, hereafter called TfSGL, showed no significant sequence similarity to other known GH families. However, it showed significant similarities to other eukaryotic proteins with unknown functions. The researchers thus propose that TfSGL and these related GH enzymes be classified into a new family, which they call GH162.

Usually when scientists find a novel protein--in this case, an enzyme--they further clone the gene containing the sequence that encodes it to better understand its functionality. This clone is called a "recombinant" sequence. The recombinant TfSGL protein (TfSGLr) was found to break down both linear and cyclic β-1,2-glucans to sophorose, a simpler and smaller carbohydrate.

Stereochemical analysis done by these researchers revealed that it is an inverting enzyme, a characteristic that is associated with its mechanism of action. They found that TfSGL breaks down sophorooligosaccharides (β-1,2-glucooligosaccharides), with degree of polymerization of 5 or more, to the disaccharide sophorose as the main product.

X-ray crystal structure analysis revealed that the overall structure of TfSGLr is similar to that of members of the GH144 family mentioned earlier, notably CpSGL. However, the two enzymes are very different in amino acid sequences, as well as substrate recognition sites and the positions of the base catalyst. This difference indicates that TfSGL and its homologs probably make up a novel family, and that there could be a molecular evolutionary relationship between GH144 and GH162.

In fact, most TfSGL homologs are found in eukaryotic organisms, particularly fungi (Basidiomycota and Ascomycota), and slime molds (Mycetozoa). Some of these species are associated with the rhizosphere, which is the ecosystem around the root and the soil, where the metabolism of cyclic β-1,2-glucan might occur as part of this symbiotic relationship with plants. Other species are parasitic, and thus, it is believed that the cyclic β-1,2-glucan might be used to reduce immune responses in hosts. TfSGL homologs are also speculated to be involved in interactions with other organisms. 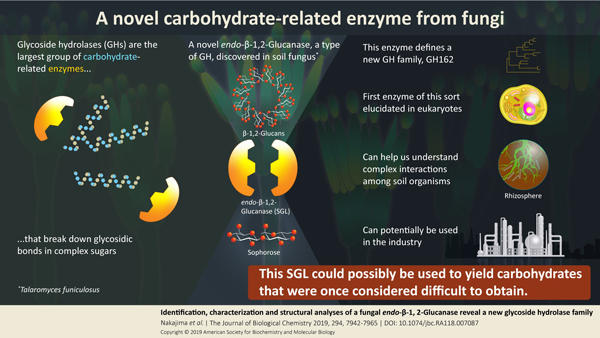 This novel enzyme, TfSGL, breaks down β-1,2-glucan into sophorose. According to Nakajima, "As the functions and applications of sophorose become more apparent in the future, the enzyme could potentially be used for sophorose production. β-Glucanases already play an important role in our lives, as they are widely used in biofuel production.

Nakajima concludes by surmising, "The structures of sugar chains are complex and diverse, and sugar chains are also involved in various life phenomena. Synthesis and degradation of such diverse sugar chain structures are performed by enzymes, but only one end of the diversity seems to have been understood. With our research, we hope to identify genes encoding novel enzymes that break down sugar chains and yield carbohydrates that were once considered extremely difficult to prepare."

With a mission of "Creating science and technology for the harmonious development of nature, human beings, and society", TUS has undertaken a wide range of research from basic to applied science. TUS has embraced a multidisciplinary approach to research and undertaken intensive study in some of today's most vital fields. TUS is a meritocracy where the best in science is recognized and nurtured. It is the only private university in Japan that has produced a Nobel Prize winner and the only private university in Asia to produce Nobel Prize winners within the natural sciences field.
Website: https://www.tus.ac.jp/en/mediarelations/